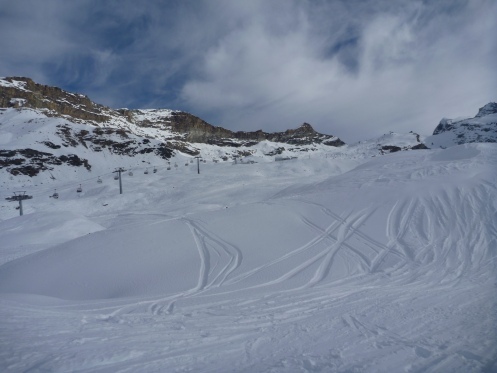 With Chamonix still looking a little greener than we would like it was no surprise that Grand Montets delayed their opening until 10th December.  That doesn't mean there isn't some good skiing to be had nearby.

If you fancy getting some early season turns in this weekend prior to the opening of Grand Montets than I would suggest heading through to Cervinia in Italy.  Although it's a bit of a drive ( 1hr 45 min) it's worth it if you want to get some skiing in.  Best of all, it'll be on real snow not the artifical stuff.  The picture above shows Cervinia yesterday.

The majority of the lifts are open and the pistes are in pristine condition. The snow on piste is really grippy letting you have plenty of those "feel good" turns - just what you want for your first day of the season.  It's snowing there at the moment so there will be some fresh tracks to be had in the morning.

It's not only the skiing that's good - you can get great cheap Italien coffee too.  I'd recommend the mountain hut at the top of the Theodulpass for lunch.  Althought not an attracticve building from the outside the pasta is suberb and the staff very welcoming.

It's forecast to be quite windy tomorrow so wrap up warm.  Remember to check the weather and lift status before you leave in the morning.