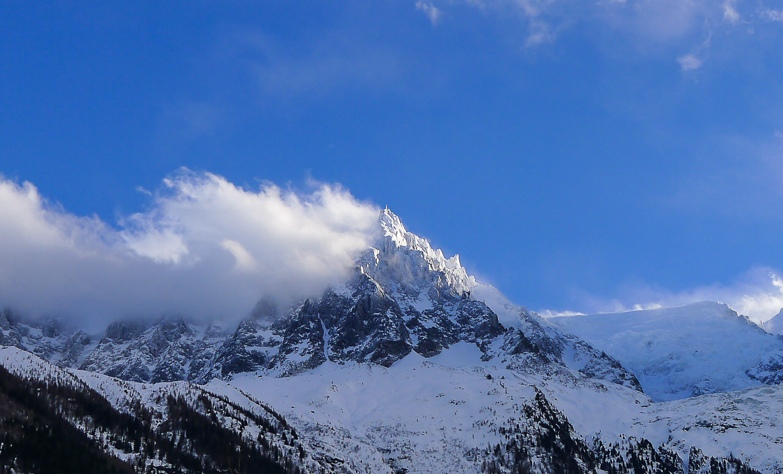 The last week or so has seen some dramatic weather in the Alps, and Chamonix has been no exception. Following the excellent snowfall over Christmas and New Year, we were battered by Storm 'Eleanor' and some seriously mild spells.

During these mild spells the freezing level frequently rocketed above 2000m, sometimes higher. Along with this we had plenty of rain and a correspondingly high avalanche hazard resulting in lift closures. Thanks to our clients being able to absorb last minute changes, we have managed to maintain a degree of flexibility and move courses to domains that are open.

The rain has of course had a drastic affect on the powder. The snowpack became saturated, the surface becoming covered in drainage runnels and thick crust off piste. You may well have also seen conflicting informations about snow stability. Ultimately, increasing load in this form rain resulted in quite a few avalanches, some running to the valley floor. But over time rain makes the snow much more homogenous aiding stability. Finally when the freezing level drops we get a refreeze and a very stable base for further snowfall.

In recent days it has done exactly that, with slightly colder temperatures resulting in fresh powder up high sitting on a firm base. The great news is that the firm base won't be destroyed or transported by the wind now, and there is blanket cover at medium altitudes in the mountains. As further snowfall arrives, we should see some ideal powder skiing.

Rain and precipitation has just been one issue, the other being high winds. During Storm 'Eleanor' winds of 220 km/h were recorded at altitude. Sadly, that has resulted in some unprecedented damage to the Panoramic Mont-Blanc Telecabine which spans between the Aiguille du Midi and Pointe Helbronner. The cable has been severed in a number of places and the classic Vallée Blanche descent now has the additional hazards associated with high tension cables buried in the snow. Plans are being made to assess the damage but may take some time due to the weather. Further details are available in this article from La Chamoniarde.

Yesterday, the Chamonix Valley once again experienced significant snowfall during running over the frontier from Italy. This was more significant than expected resulting in an interim update to the Metro France Avalanche Bulletin. At just after 7am a large avalanche came down from the Aiguille du Goûter towards the village of Les Houches. This area has some of the largest avalanche defences in europe, which did their job preventing the debris reaching the village. However, the subsequent air blast destroyed trees, vehicles and an electricity pylon. Luckily nobody was injured. Details are available here from La Dauphine and Avalanche Academy (Facebook Link).

We look forward to seeing many of you soon. There are still a few chances to join us with availability on: