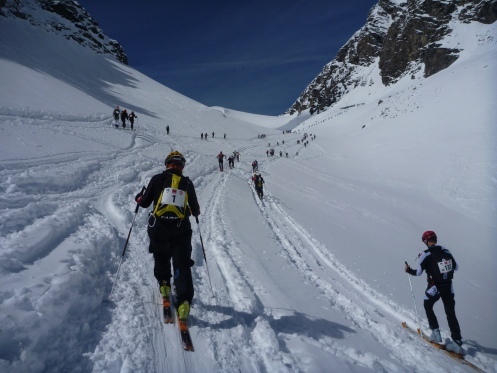 Having had the disappointment of the Patrouille Des Glaciers 2012 being cancelled in Arolla due to the avalanche risk, Di, Catrin and I were determined to give it another go.  2 years ago everything had gone well for us; we were all fit, healthy and injury free.  The only factor that hadn't come together was the weather conditions. This year it was a very different picture. The only thing that seemed to have come together for us was the weather conditions. For the month prior to the event we had been plagued with chest infections and knee injuries, but with it being too late to change team members we were all keen to give it a go.  2 years seemed like a long time to wait for another opportunity.  We were realistic that we wouldn't be as fast as 2 years ago and our aim was simple; to get to the finish.

The week prior to the race the start list was issued and we were amused to see that we had been given number 1.  With over 1500 teams competing the odds of getting this were very slim. At this point we were naive as to how much this would add to the whole experience.  Right from the point that we went to register we were given the warmest of welcomes, everyone delighted to see team number 1.

The weather forecast given at the race briefing gave us a glimmer of hope that we might achieve our aim.  The commandant declared the weather as "a temporary lull between 2 fronts".  This proved to be very accurate as it stopped raining in Zermatt around 4pm and started again in Verbier by 6pm the following day.

The monotony of skinning up towards the Tête Blanche was broken by whispers of  "seine nummer eins" as teams came passed us.  Often this was replaced by loud calls of delight "allez numero une" or "suo numero uno" and "c'est le meilleur dossard" giving us the opportunity to engage in conversation with other competitors we'd not have had with if we were wearing one of the other 1499 numbers.

We arrived at the Tête Blanche with no wind and the stars were out.  It was quite a difference to battling the winds in 2012.  I felt different too.  I remember then feeling unwell for 4 reasons; being cold, not being fit enough, not being well enough acclimatised and being hungry.  This time I was none of those things.  Simple things make a big difference.  I had put my extra layer on before I got cold.  I had eaten before I got hungry.

One team that didn't stop to say hello were Team RAB.  I don't recall their number (it wasn't number 2 as we were looking out for them!).  They passed us heading up the piste from Arolla.  They caught my attention because of the speed they passed us at; working as a cohesive unit to travel fast as a team, properly "having it".  As they stormed ahead I was sure I recognised the body shapes as Ben, Ben and Jon. When we traversed Lac Des Dix, I thought to myself if they had achieved their aim of a sub 9 hour race then they'd be finished by now.  I texted for an update and they had indeed finished in 8 hour 39min.  I also thought "I haven't seen anyone else pass us at that speed, maybe they are the real team number 1."  It transpired that they were one of the fastest teams on the hill, winning their category and coming 3rd overall.  A fantastic achievement and it was great to see them in action on along the way.

Approaching another check point we heard the voices of the marshals calling out the numbers of the teams as they passed by "2031, 1342, 1027" with slight boredom in their voices. " It's number 1" they exclaimed like they had just got the winning number in bingo.  This was the sort of exclamation we had become accustomed to by now.

As we passed Cabane de Mont Fort as British chap skied passed.  He took a double take and then stopped.  "Are you team number 1 in the PDG?" he asked.  "Yes" I replied. "But only in number, we are one of the last".  His face lit up like a train spotter seeing the number they have been waiting all day for.  He shouted after his wife "Wait, stop, I have seen team number 1!"  We continued our descent to Verbier, slightly bemused by the delight we had obviously brought to his day.

We were pleased to cross the line before the cut off time and arrive in Verbier on foot, rather than by bus as in 2012.  Thank you to the Swiss Military and all the officials for organising such a great event.  Thank you to the other competitors to showing nothing but fair play and sportsmanship as the Commandant has requested.  Thank you to whoever gave us the little weather window.  Thank you to the person behind a desk that issued us number 1.  Little did they know how much it would add to this wonderful experience? Or maybe they did...

There are a few photos from the event here.