The Long March to Certainty 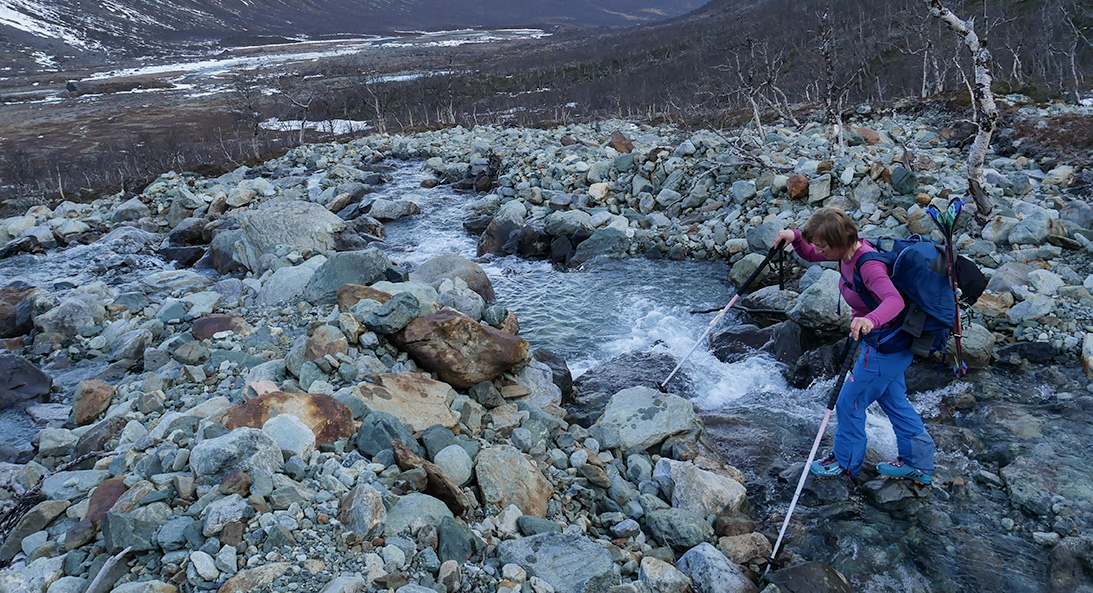 Uncertainty is normal in the mountains, an integral part of exploration. We always strive for big margins, and to choose the certain option when faced with events that are difficult to predict. Alison Thacker recounts one of those moments during a ski touring close call in Lyngen.

My husband, James, is learning the hard way. Whilst flicking through the guidebook one day after work, he casually comments, “There’s a traverse around Jiehkkevárri. We should do that.” Once the idea is on my radar, that’s it, I’ve taken it as read that we’re doing it. He’s learning that perhaps it’s better to keep those pondering thoughts to himself. The guidebook says, “The tour around Jiehkkevárri is the nicest ski tour I have ever done in Lyngen. I recommend it warmly” (F. Guldal, 1979). You have to read on further to discover that it’s 40km and 2800m of ascent. I don’t think James had got to that bit when he mentioned it.

We only had one day left in Norway but that was ok. By my calculations this would take between 12 and 17 hours. There was time. Not plenty of it, but enough. With the added pressure of a plane to catch, there had to be enough.

Our 1am alarm call was marginally easier to deal with thanks to near-24-hour daylight. We knew the snowline would be high on the west side of the Lyngen peninsula, but were disappointed to see that it was as high as we had feared. We had secretly hoped that the deep valley of Sløkedalen would have held the snow better than in other places. The saving grace was that all the snow had gone in the lower valley, making it easy to walk on a good footpath.

The first obstacle was the river crossing. We went further upstream than needed to find a section that was still frozen, just, and with lightly placed feet, we got swiftly across, and could now see the snowline, still some 300m above, where we’d be able to skin from. 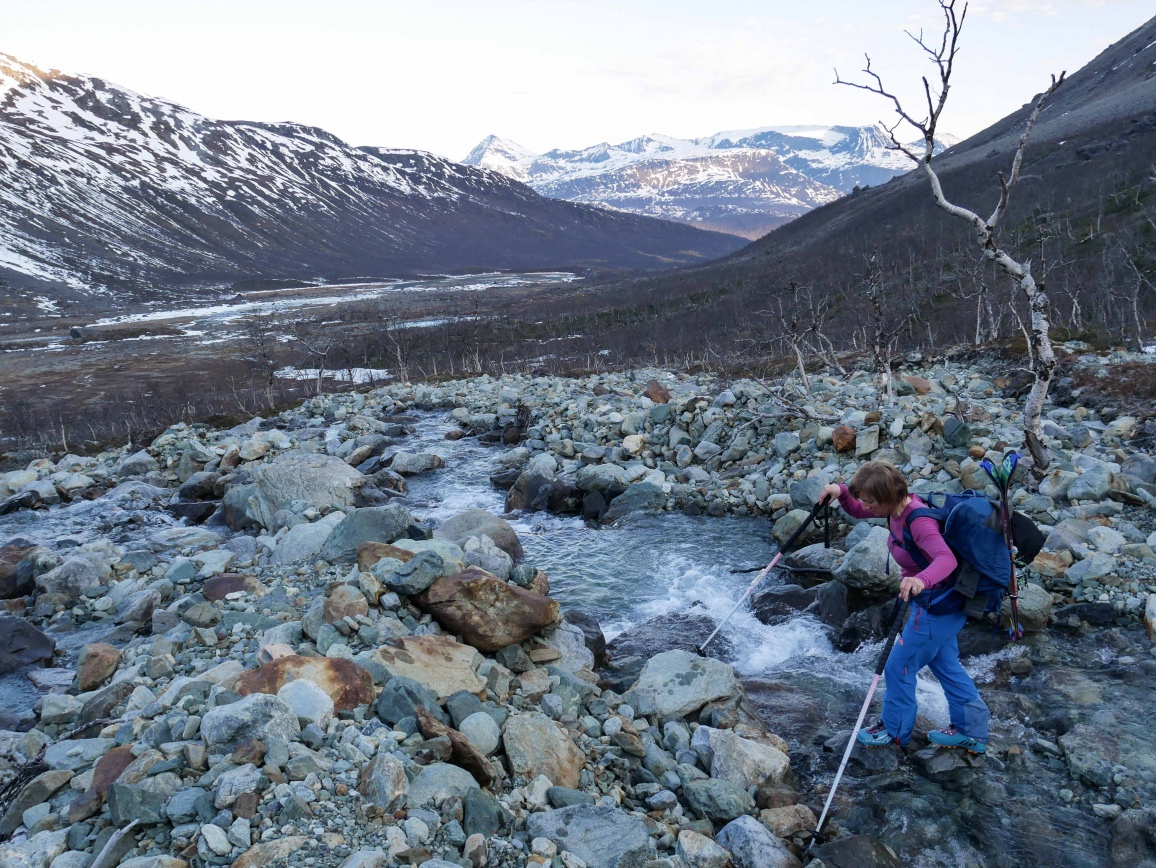 There was an old ski track that looked like it was from yesterday. It would be easy to pretend that we were disappointed to see evidence of other people but I think we were in fact slightly relieved to discover that we weren’t the only people daft enough to walk so far to the snow line.

There’s a little extension to this circuit, a small deviation to the south, to take in the summit of Bálggesvárri. The guidebook is convincing: “The summit of Bálggesvárri is only around 400m from the col, and we highly recommend a visit!” As it also features in Espen Nordahl’s book - a list of classic peaks in the area which I have affectionately called ‘The Nordahls’ and which I am unashamed to admit that I am ticking off - this peak was not optional. Think of the Dubh Ridge on Skye and being a Munro bagger. Then you’ll understand where I’m coming from.

Summiting took longer than our calculations, with steep icy slopes requiring a transition to crampons, but then discovering that the crust was breakable when on foot. Our steady skinning rhythm had come to an abrupt halt. Once we summited, we were faced with the next decision. This was commitment point. We knew this outing wasn’t going to be about finding the best snow. But being so early meant that our descent was going to be teeth-rattlingly hard. It was tempting to wait a few hours for it to turn to silky spring snow. Did we settle for having bagged one of the remote Nordahls, ski the fine spring snow back to the riverbed, and be down in time for an early lunch, or did we commit to the full circuit and continue into the unknown?

I’m sure that if either one of us had backed out the other would have been delighted, but we couldn’t find any suitable excuses. The next col was now in view and it looked passable, the time and weather were on our side, and we questioned if we would ever find ourselves with this opportunity again. We decided to grasp it with both hands.

We didn’t stop until we needed to put skins on again, enjoying a long pitch of deteriorating snow. It was good spring snow at the top, but as we descended, predictably, it became slower and stickier. We left behind any evidence of recent activity. We hadn’t seen anyone since leaving Tromsø this morning. 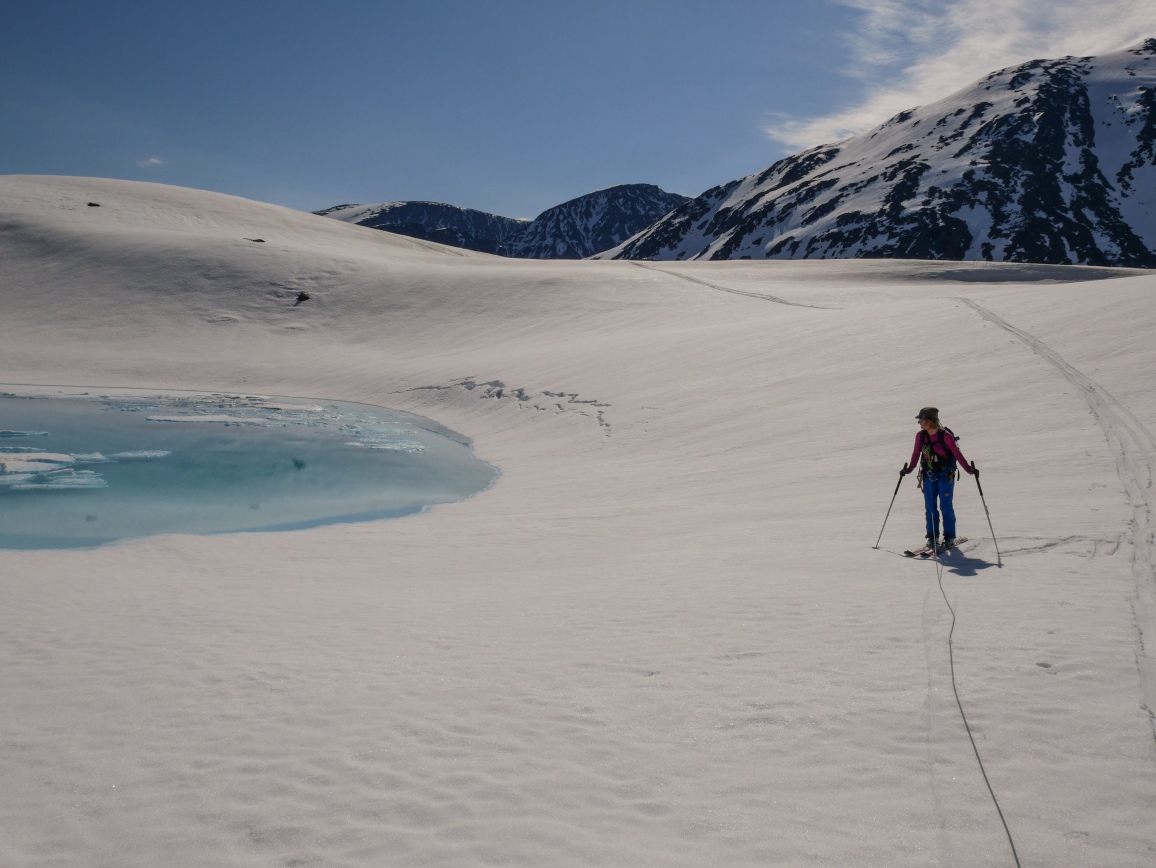 For the ascent to the next col at Tobrekardet, we were definitely operating in the type-2-fun range. Progress to the next col was slow, skinning transitioning to booting, and again we were sinking, but this time because of the heavy slushy snow. We longed for the breakable crust of earlier, which would have been considerably easier than this! There was also the apprehension of getting to the top and seeing over the side. This was a key passage; turning back now would entail the same distance as going forward, and the thought of reversing that journey wasn’t an appealing one. 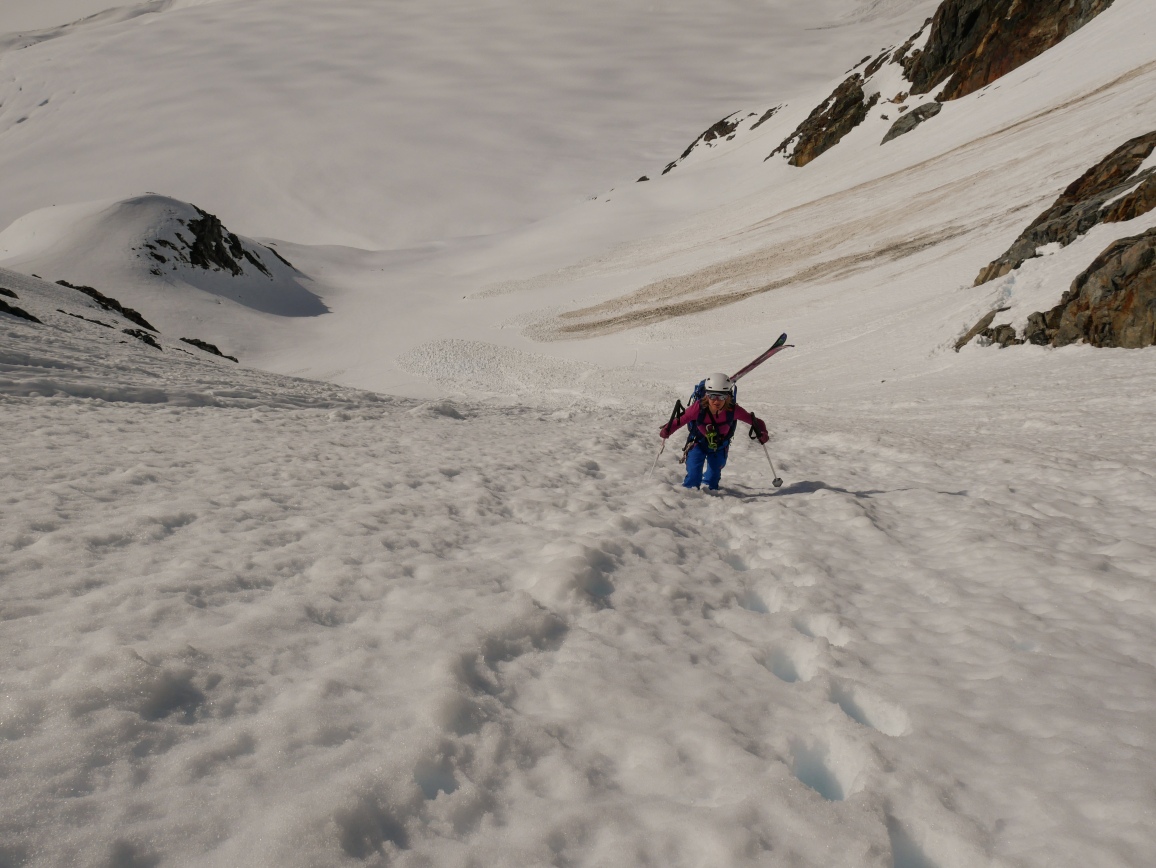 There was physical relief on reaching the summit, and mental relief at seeing that the descent would work. It would go. In other conditions it would be fun, but the snow hadn’t fully transformed to spring snow, and needed a few more good freeze/thaw cycles. With some careful side-slipping on a rope through the steepest part, we were away. We were faced with another desolate glacier, again with no sign of any tracks. We were alone, and had been for some time now.

More skinning, fully into our routine now: skin, boot, ski, repeat, and we were rewarded with a stunning view down the Rypedalsvatnen. We had a fabulous ski down to the lake, and although we didn’t know it at the time, these were to be the last turns of our season. 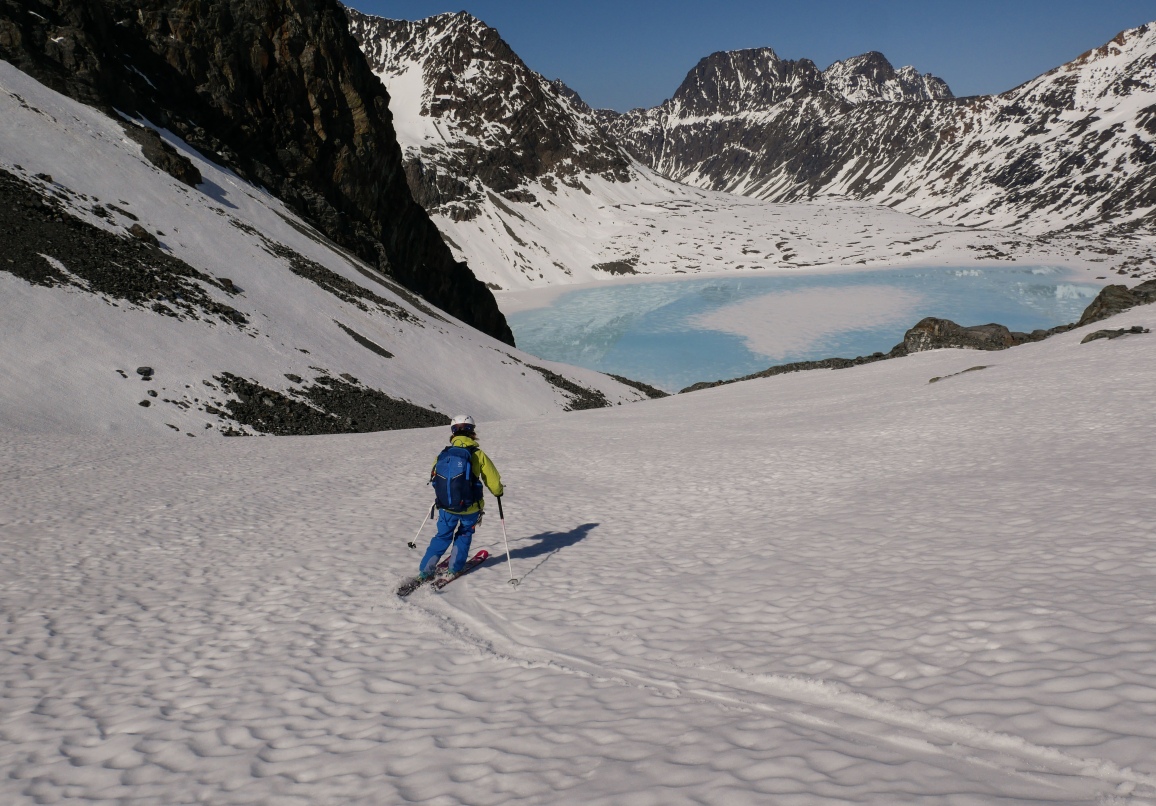 We now had a view of our final slope, with the last col being slightly obscured from view. It was hard to see a safe line. Yes, there were options, but none of them seemed appealing. All steep and exposed to serac fall and the lake. It was warm. Very warm. There was an alternative escape route but we didn’t look on this with excitement. It was longer, flatter, and we would end up a long way from our car.

Reluctantly, we made our decision, not 100% convinced by it, but knew we’d get home. We opted for the long way. It was easier than dealing with the internal dialogue of “it might be ok, but what if it isn’t.” We didn’t need this added stress at this time of day. We had enough unknowns, and now we wanted a guaranteed outcome.

Suddenly, the peace and quiet was rudely interrupted by a loud WHOOOPHFFF!  We turned around to see an avalanche crash into the lake, where we would undoubtedly have been if we’d made the decision to continue. Our doubt turned to certainty and this certainty made the long slog that was to come slightly more bearable.

The valley wasn’t steep enough to glide down with the sticky snow. Regrettably we resorted to skinning downhill. Our heads knew this would be faster, but our hearts were still wishing for a few more turns. They weren’t to come, and endless boulder fields led us down to the finish at the sea, 16 hours after leaving the car, with 2400m of ascent and 33km behind us.

Fatigue was taking its toll and we still had the challenge of getting back to our car. There is a rumour in Norway, that if you knock at the door of the first house, you’ll be met by a chap who doesn’t speak a word of English, but for a small fee, has gotten many a stranded skier back to their car. Thankfully it turned out to be true.

James has been keeping his ideas to himself recently.

Note: This piece was originally published to the Jöttnar Blog here: https://www.jottnar.com/blogs/news/long-march-certainty. It was written well before the uncertainty of COVID-19. The traverse was made on the 14th May 2018.