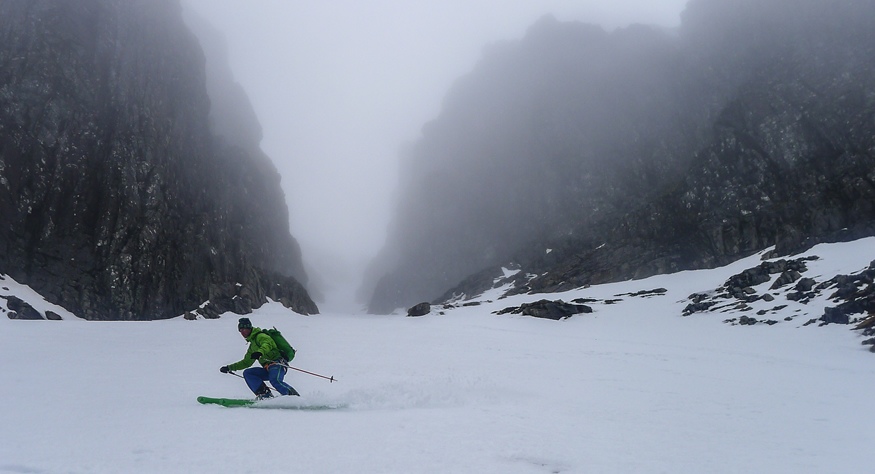 Back in April a keen group of skiers gathered at Nevis Range for arguably one of the more "niche" weekends in the Off Piste Performance calendar. The Ben Nevis Ski Weekend.

Scottish backcountry skiing has seen a huge resurgence in recent years, but it's probably fair to say that the moody slopes, gullies and couloirs that split the 'North Face of Ben Nevis' are still viewed very much as the domain of the winter climber. There are no ski lifts here, and any turns are well earned and very much for the connoisseur.

After a quick kit sort and coffee we made our way up the track, before parking up the cars in the forestry plantation. Here we donned heavy sacs and toiled upwards to our home for one night, the CIC Hut. The dry conditions meant that we could walk up to the hut in trainers, changing to ski boots just above the hut before scoping out our lines. For me, this is one of the special things about skiing on a mountain that I know so well from a winter climbing perspective. Looking upwards, you are rewarded with the opportunity to look at familiar terrain through a different lens. Where often I am seeking dribbles of connecting ice, here we were looking for continuous strips and patches of unbroken snow to leave our mark.

Although the preceding days had been warm and wet, there was still plenty of snow high on the mountain. Of course the rain had exposed many of the boulder fields low down so it was a challenge to get to the snowline, especially with Coire Leis' own patented slime. Eventually, we were able to attach the skins and make an ascent on skis. A few laps in the lower reaches of Coire Leis warmed us up before we decided to skin once more, before booting up to the abseil posts on the Carn Mor Dearg Arete. It was clear this area falls very much into the realms of "steep" for most people, but the snow was friendly, spring like and above all consistent. Despite the mist everybody was confident skiing down, with just a couple of hand down type moments due to nerves. With a sweeping line taken down under the 'Little Brenva Face', everybody was in a buoyant mood as we stumbled down back to the CIC Hut.

While some went to get a brew in the hut, another group climbed into 'Observatory Gully' skiing the bottom section below the flanks of 'Tower Ridge' and 'Observatory Buttress'. Finally, for those with some spring left in the legs some really short swinging turns were required to make the most of a narrow strip of snow dropping to the Allt a'Mhuillin.

After a relaxing morning in the CIC we were quick out of the blocks the following morning with a dry and bright day. Climbing up into Coire na Ciste we decided to climb up No.4 Gully before roping in and skiing down to the lochans. A quick look at the watch indicated that we had plenty of time so we decided to head back up skiing No.3 Gully from the narrows above No.3 Gully Buttress. Here the snow was at it's finest, transformed to spring corn before going a little bit heavy at the bottom. Still good fun for those with wider skis, while those with traditional touring skis just straight lined it!

All that remained was for us to pack up at the CIC Hut and walk out, back to the cars. With lighter loads and some successful descents under our belts the walk went quickly, only punctuated by conversation of when to return next year.

Thanks to Gillian Parker, Andy Nelson and an enthusiastic group made up of: Mark, Guy, Ian, Daniel, Sonia, Stuart, Nicolò, and Robert.

If you would like to join us this year on the 5 and 6th April 2018 please check out the details here.