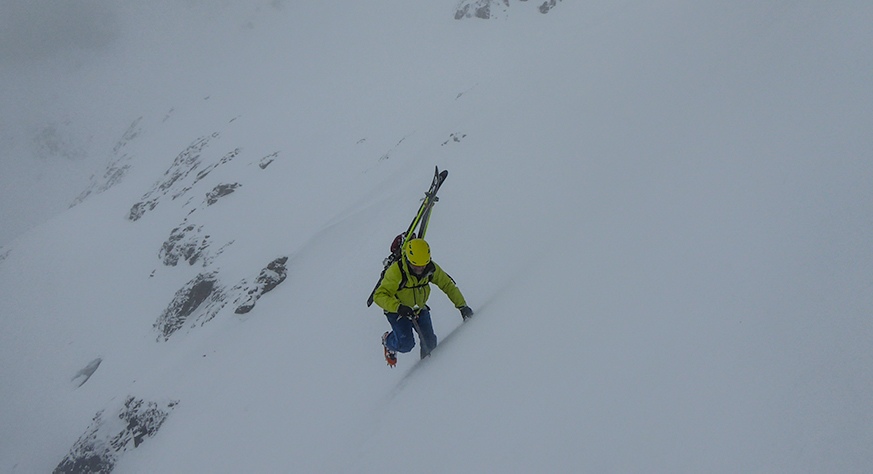 For the first time last season Off Piste Performance offered two days of steep skiing for members of the Eagle Ski Club. The 'Steep Eagles' weekend proved to be more memorable than planned in many ways.

First up, the weather was true to form being nothing short of exceptional on the run up to the weekend, with plenty of fresh snow on the west coast of Scotland. Climbing parties on Ben Nevis returned with tails of trail breaking, big cornices and deep snow all of which was hampering climbing progress. But sub-optimal conditions for the climbers was a combat indicator for conditions to come. A quick service of the medium girth skis was called for such was the requirement for extra float in the powder.

This was of course, until the west coast made contact with the enemy, in this case a large slow moving front coming in from the South West. The ensuing thaw and elevated avalanche hazard saw us head to the Cairngorms to snatch victory from the jaws of defeat.

"Rods of rain in Fort William,  a full gale blowing up top, and a twitchy snow pack to boot: so all in all very reassuring for a Scottish novice to be in the safe hands of a master of steep Scottish skiing, mountain guide James Thacker. Tricky conditions on Ben Nevis made for an easy decision to head across to the Cairngorms to see what could be done.

Aviemore was clearer, drier, but with something of a breeze upon the hill. An exfoliating, heads down, double Gore-texed  skin up from the Coire Cas car park to just below the top of Lurcher’s Gully yielded enough pleasant ski down, all the better for having the wind on ones back. This was rounded off by an atmospheric traverse round into Coire an t-Sneachada as the mist came in and wind dropped.

Injury forced Simon to reluctantly pull out of the second day. James led the walk up to the CIC Hut, from where we headed up into the swirling mist of Coire na Ciste. Plenty snow, a little damp, but stable enough. We worked our way up the lower part  Moonlight Gully, but hopes to ski it from the top were frustrated, by the discovery that my pair of Scarpa Maestrale boots had cracked right across the toe.

The ski down was one of the best of what turned out to be a foreshortened season, pleasantly steep, and very respectable snow in an awe-inspiring, setting resonant with mountaineering history. After a quick brew in the hut we headed up to the Coire Leis, before several long pitches of skiing down into the sunset and back towards Fort William.

A perfect day, and a weekend where we made the best of what was possible. There were plenty of future plans to mull over in my bunk as the Caledonian Sleeper trundled back down south."

The silky spring turns that we made out of Coire na Ciste and Coire Leis became the last turns of the winter as coronavirus hit the UK shortly afterwards. Despite the wild weather, and uncertainty of choosing appropriate lines in the conditions, Ben Nevis had lived up to it's reputation delivering some great snow. As we write this now in October we very much hope to return to Ben Nevis again, details of our courses and trips in Scotland can be found here on our courses and trips page.