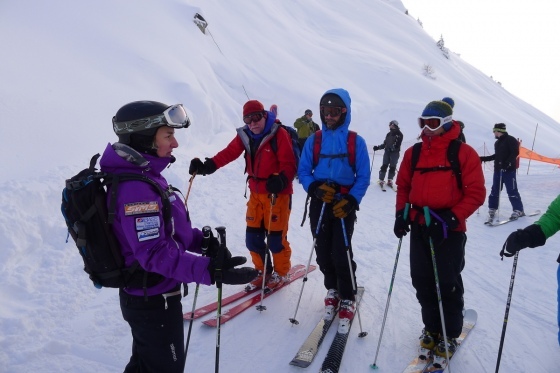 When Les Grands Montets was still green on 4th December we were wondering what to do about our first Ski Performance Course for Mountaineers.  Over the last 5 years we have always had excellent snow conditions for these early season courses so we were reluctant to cancel this year's one especially as there was snow forecast for the week ahead.  It went ahead as planned with the irony that we had to cancel the final 2 days of the first course as the resort was shut because there was too much snow!  In Chamonix more snow fell last week than we had during the whole of last season, setting us up nicely for this week's course.

This week's group skied deep powder on Monday and Tuesday, and also developed some coping strategies for poor visibility.   On Thursday the group learnt to deal with the fine crust that had formed on the surface of the snow, and today we finished with skiing some beautiful chopped up soft snow.  The conditions this week were ideal - providing us with the opportunity to ski most types of snow that the off-piste can throw at us.

The next Ski Performance Course for Mountaineers is January is full, but there are spaces 6th - 10th Feb, in half term week for teachers 13th - 17th Feb, and 12th - 16th March.