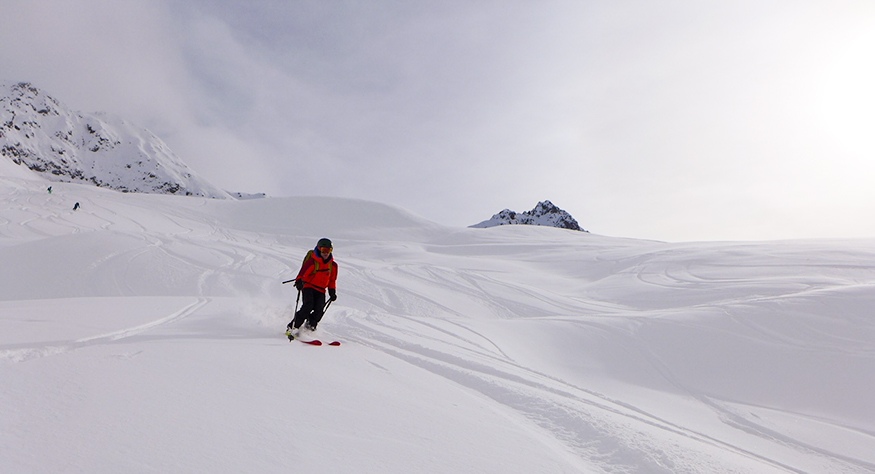 After a bit of a snow drought through the Christmas period, we were delighted that the powder arrived just in time for the Eagle Ski Club “Ski Performance for Mountaineers”. When I say “drought”, there was plenty of snow above 2000m on the ground, there just wasn’t much falling out of the sky. Following last week’s snow, there is now a good base and some lovely powder on top, with around 2 metres of snow at 2500m.

It’s stayed cold for the last few days, and is forecast to do so for the next week. This has resulted in the powder staying cold and being light and fluffy to ski, as long as you steer clear of areas where it has been affected by the wind.  The Eagle Ski Club group found ideal conditions in Les Contamines on Friday, to put their newly developed techniques into practice in untracked snow.

Since 2013, we have offered a “Ski Performance for Mountaineers” courses specifically for members of The Eagle Ski Club. It involved 4 half days of off-piste ski instruction, this year delivered by Derek Tate and Dee O’Neill.  There is then an optional 5th day with IFMGA Mountain Guides Neil Johnson and Jonny Baird. This year they were assisted by aspirant guide Kevin Avery. This day gives the opportunity to do some short skins to find the best snow possible, to put it all into practice.

As ever, it was great to see so many members of the club out enjoying their skiing and making progress with their off-piste technique, which will no doubt prove invaluable on further tours.

We have the following places left on our Ski Performance for Mountaineers course for this coming season. Look out for next year’s dates being released in March.