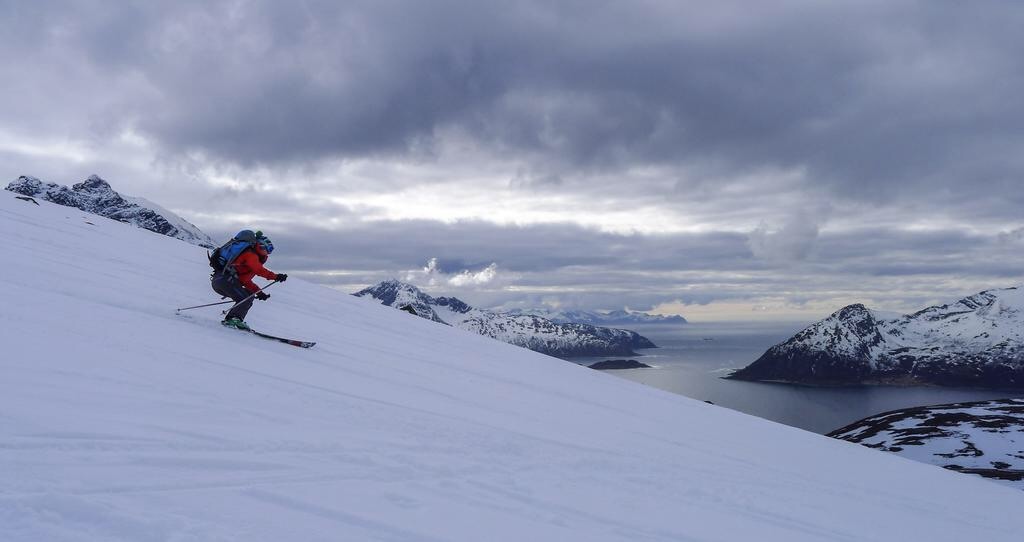 The last three weeks have been spent in the Arctic Circle, skiing in and around Tromsø (Troms) and the Lyngen Alps. This is the third time I have visited this area, and it never ceases to amaze me with the combination of excellent terrain, skiing above the sea and it's sometimes moody and wild weather, which also makes the good days even more special. It's very much like skiing in Scotland with more reliable conditions, dried cod and really expensive alcohol.

James Thacker and I had planned two weeks of work in this exciting area, combined with a few days to explore at the end. These weeks were quickly filled and we look forward to arranging a trip to this exciting area next year.

Flying into Tromsø the weather was changeable but the snow cover was good allowing us to check out the conditions on 'Lille Piggtinden', 'Store Hollendaren' and 'Fagerfjellet'.

As we met Bill, Fin, Anne, Seren, Ian, Martin and Michael in Tromsø the weather had deteriorated bringing some challenging conditions for the coming days. With poor visibility and high winds "white out" conditions prevailed giving some interesting navigation in the mountains.

Outings to 'Ullstinden' and 'Kjølen' followed, navigating in poor visibility, the latter summit being particularly good it is furnished with a hut just below the summit. Both on the Troms mainland, these mountains are easily accessed from Tromsø. Trying to make the most of the forecast we then decided to head to the most northerly point of the Lyngen Peninsula, getting just below the summit on 'Russelvfjellet'. This excellent peak often seems to miss the worst of the weather and we enjoyed some excellent skiing on spring snow, in a small circular tour from the road.

Next up, we decided to visit the small summit of 'Urtinden' near 'Ullstinden', where we skinned into a small couloir we had spotted on a previous visit. This allowed us to do some interesting skiing on slightly steeper terrain, but at a low altitude and largely sheltered from the weather. We also found some epic crust to test our technique on.

I made an ascent of the attractive peak 'Stortuva' near to Oldervik while Michael, Fin, Bill and James decided to ski the Tomas Couloir in the Lakselvtindane Massif. After a significant climb and some technical skinning we enjoyed a long powder descent followed by some epic spring snow at lower levels.

For our final day we enjoyed some excellent weather on 'Storstolpan' on the island of Kvaløya, skiing from just below the summit down above the fjord in a fresh accumulation of powder.