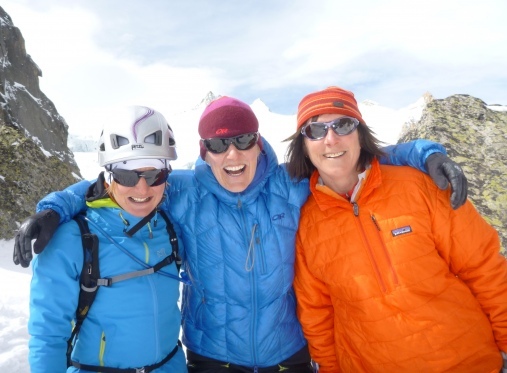 By now you will have read a few “Tweets” regarding the Patrouille des Glaciers and you might be wondering what it is.  For me it is certainly ski racing with a difference compared to what I am used to.  Here is a little background on the event.

It has been described as the toughest team competition in the world and the most prestigious ski mountaineering race there is.  1400 teams (of 3) race between Zermatt and Verbier climbing 4000m and travelling 110km, the majority of which is done at night.  The men’s record stands at 5 hrs and 52 min and the women’s at 7 hrs 41min.  The time limit is 19 hours.

The idea of carrying out the PDG arose shortly before the war broke out.  The aim was for the troops to prove their operational capability in the context of an extraordinary team competition.   The chosen route was the already famous "Haute Route" leading from Zermatt to Verbier. This route, which usually took four days to complete, had to be covered in a single stage. The first race was held in April 1943, and the "Patrouille des Glaciers" had become a reality.

Sadly, the third race in spring 1949 was marred by a tragic accident. On their way from Arolla to Verbier, a military team fell into a crevasse on the Mont Miné Glacier; it was eight days before their bodies were recovered. An event that had been launched with such enthusiasm came to an end with sad pictures shown on the newsreel. The shock was profound in the mountain areas and as a result, the former Federal Military Department banned any further races. This ban remained in force for over 30 years.

The PDG myth lived on and was passed down from father to son in the valleys of the Lower Valais. From these memories, a desire to resume the race emerged. In 1983, Lieutenant General Roger Mabillard, Chief of Training in the Swiss Armed Forces, agreed to this widely expressed wish.

In April 1984 the event began again. Around 190 teams started the race from Zermatt to Verbier. Maximum efforts were made to guarantee safety on all parts of the alpine course. This order from the armed forces command has remained an unambiguous guideline to this day.

Since then the PDG has lived up to its mythological status. Interest in this unique military event has increased with every competition. In 2006, the number of mountaineering enthusiasts who applied to participate was so high that the command decided for the first time to hold two separate events from Zermatt.

The event attracts not only a large amount of competitors but thousands of spectators at the start and finish and at various cols along the way.  It also takes an unthinkable amount of organising to maintain the high safety standards.  There are army personal camped out along the course for the whole week!