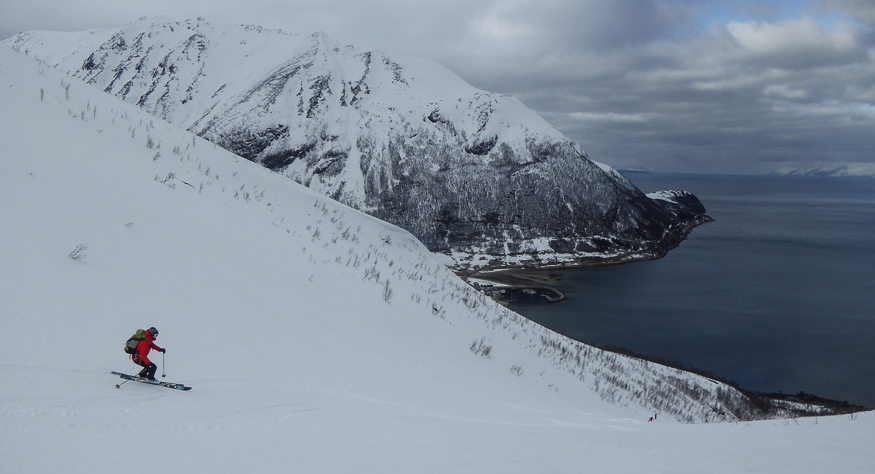 “I've never bonded with other mountains on this planet the way I've bonded with the ones in Scotland, and I've seen a good few mountains. However, I feel differently about Norway and its coastal mountains. I feel something special is afoot.” Des Reid, April 2017 Lyngen - Oldervik

During April and May we made our annual pilgrimage to inside the Arctic Circle. Our programme of ski touring trips to this area has now become a regular feature on Off Piste Performance’s calendar. There is one simple reason why; season after season we find ourselves being drawn back to this beautiful landscape. It’s addictive.

Our two weeks were spent spent at our homely base in the small fishing village of Oldervik. For the first week we were blessed with blue skies day after day. There was a downside to the fine weather though.  Although we had blue skies, but it wasn’t yet warm enough for the snow to transform into spring conditions, and it many places the snow had been wind affected. Getting good views was guaranteed but getting good snow wasn’t.

After a warm-up day on one of our local favourite hills, Ullstinden, we headed to west to the mountain of Buren.  There are so many ways up (and down) this mountain, it’s possible to go there numerous times and never take the same route twice. There are also lots of different aspects to ski, so normally there is good snow to be found somewhere. As James would say, “we had to work the micro-aspects” to make the best of it! The views were superb, getting dramatic views down Ersfjord but the snow was challenging.

There was a real treat in store for us on Store Hollendarren. The upper bowl was full of acres of easy angled untracked powder. This was an ideal playground for practicing powder turns. So much so, that we did a second lap. Focus was needed to negotiate the tricky lower slopes between the trees and icy patches. Having the fjord (Grøtfjord none the less) as a backdrop proved a constant distraction.

A week in Oldervik wouldn’t be complete without an ascent of Stortuva. Many choose to avoid this hill, due to the long flat final approach to the summit, not too dissimilar to many Scottish hills. We’re quite happy about that, as it leaves the mountain quiet for us. Never have we shared this space with other skiers. The summit might be Stortuva itself but the main event is the descent gully back to Oldervik. It’s narrow enough to be a gully and feel like you are being funnelled down into the sea, but wide enough to be able to swoop up either side with smiles of delight. On this trip we found it covered in one of my favourite types on snow; the unassuming golf ball snow, or as James prefers to call it “wind blown transformed powder with a slightly mottled surface”, a sheer joy to ski.

There was one set of tracks when we arrived at the top of the gully.  Looking at the tracks you could imagine the smile on the face of the skier as they descended. They were the tracks of Rupert, our chef. Having summited before, he conveniently “needed to get back to bake a cake”, making a swift turn around, having the pleasures of the gully all to himself. We arrived back to the smell of delicious home-baking, presented by Rupert with a rather large grin.

There are many beautiful places to ski in the world. Luckily we have our own personal favourites. The places where we feel that tingle as we look out of the window of the plane on arrival, and a feeling of both emptiness and being fulfilled on departure. We leave wondering when the bond will draw us back. For me, that’s skiing in Arctic Norway.