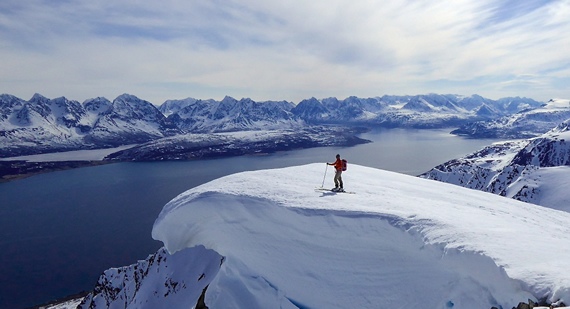 While the ski season has been gradually winding down in the alps, it’s been another busy May for Off Piste Performance after heading to Arctic Norway once again.

We experienced two contrasting weeks, the first in Oldervik from 30th April – 7th May in brilliant blue skies and mild temperatures. While the second week based on the island of Kvaløya, was cooler with unsettled weather. Both were equally breathtaking in different ways, with the squally showers sweeping in from the west giving a dramatic feel befitting of a trip to the Arctic Circle.

Once again, a flexible approach and near twenty four hour daylight works very much to these trips advantage and we enjoyed some fantastic descents late in the evening after sitting out some rain showers in the morning. This approach just isn’t possible in the alps requiring an adjustment to the sometimes frenetic environment of Chamonix. The results speak for themselves in the form of fresh powder skied under the evening sun on mountains where we didn’t see other skiers for days!

Of course this simply would not be possible with out the assistance of George Reid (IFMGA Mountain Guide on these trips for 2016) and Rupert Hutchinson (Chef, catering and logistics manager all rolled into one).

We also enjoy some fantastic accommodation at the River House and Solli in Oldervik overlooking the Lyngen Peninsula, and in Ersfjordbotn on Kvaløya. Both offering a comfortable place to relax before or after skiing. Both are so good that we have booked ahead for next season, if you are interested in joining us please visit the trips section here.

Here’s a quick run down of what we got up to on both weeks:

Day 1 – Traverse of Ullstinden to the sea, with an extra skin in the top bowl just below summit). It was sunny weather and uncharacteristically warm resulting in a walk for five minutes to road at the bottom. But as usual the views over the fjord to the Lyngen Peninsula remain unique.

Day 2 – Storgalten, out and back by same normal route with an icy on mid way up requiring some good kick turns. We waited on the summit for 1 hour for the snow to soften before starting the descent in the late afternoon giving some excellent spring snow skiing.

Day 3 – Buren, on Kvaløya has the reputation of having some of the best views on the island with a relatively short approach. Again it didn’t disappoint with an excellent view of Ersfjord.

Day 4 – Stortuva is another striking summit when viewed from Lyngen, with one major advantage in that it can be skied direct from the house. This year we needed to walk a short distance to the snowline, but again skied some great snow.

Day 5 – Stormheimfjellet, is often overlooked on the way to the Lyngen ferry but well worth a look. We enjoyed clear conditions all the way to the summit despite other mountains being shrouded in cloud. and great views, but cooler and rain all around us (but not on us!). Great skiing on easy angled slopes. Skied from the car. So it was fantastic views once again.

Day 1 – We kicked off this week with Skitintinden, starting at 7am to avoid the worst weather, stopping just 100m short of the summit due to tricky conditions. We skied back to car at 11am just as the heavy rain started (phew).

Day 2 – With a drier forecast on the east side of Lyngen we used the efficient road and ferry network to attempt the big summit of Tafeltinden. Despite a low snowline we could skin from sea level, taking the skis on and off a couple of times to hope over some boulders. Excellent skiing on the glacier and managed to take a slightly different line allowing a continuous ski back to the van which was a bit of a win.

Day 3 – This is where the long daylight hours paid off on Middagstinden. It was raining hard in the morning so after a visit to Tromso we enjoyed an early dinner and went skiing at 5pm. We skied some great fresh snow on upper slopes after cramponing up the ridge useing crampons for last 30m.

Day 4 – We decided to visit Ullstinden once again, and where better to go, this summit affording those superlative views over to Lyngen. Again good snow in upper bowl before making a short skin to get a better fall-line ski back to the car.

Day 5 – Another case of a flexible approach paying dividends on Storstolpan. We made the trip to the local beauty spot of Hella in the morning, before having lunch at 1pm, setting off shortly afterwards. This day definitely tested the confidence of George and Alison as they interrogated the rain radar waiting until 4pm before leaving the van. The weather cleared as forecast allowing fantastic views and freshly lying powder snow, combined with amazing light over the fjord as we skied under the setting sun.

Day 6 – Nordfjellet. Here we enjoyed the best weather day of the week, but some clouds and cold wind on the summit. Unfortunately, we had to walk to 150m, after the rain and mild temperatures had taken their toll. The summit ridge was well corniced as usual but easily negotiated, resulting in another excellent ski. The only people that we saw this week were 2 people setting off up Storstolpan as we were getting back to the car!