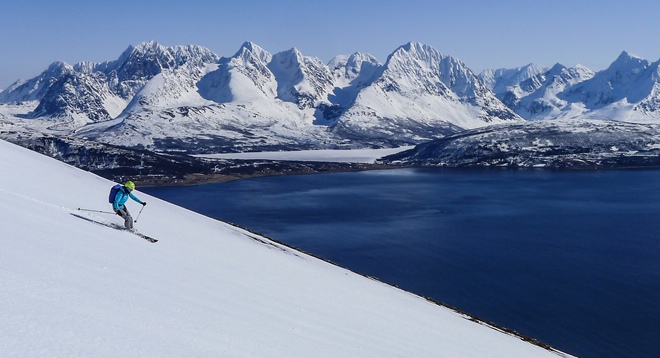 Our second week in Troms and Lyngen couldn't have been more different. With blue sky, calm seas and excellent snow we where soon praying for bad weather to give the legs a rest. This private week was arranged by Sue for members of the Club Alpin du Pays de Gex (CAF). Our land based trip was based in Oldervik on the Troms mainland, but we managed to ski on the islands of Kvaløya, Ringvassøya as well as on the mainland and the Lyngen Peninsula.

Starting near to our base in Oldervik we made a traverse of 'Ullstinden' skiing down towards the village and the sea, with excellent views of the Lyngen Peninsula (pictured).

Following the previous weeks unsettled weather, we were glad of the sun and switched our strategy aiming to ski spring snow by timing our ascent and descent. The next day we made an ascent of 'Nordfjellet' skiing some fantastic snow on the south west facing descent straight from the summit.

With a slight blip in the weather we travelled to Kvaløya and the attractive peak of 'Middagstinden', making an ascent of the ski summit on foot with axes and crampons. Another great ski followed with some speedy skating over the frozen lakes, of course it always feels better if you do this quickly.

The next day we decided to head to Lyngen, setting out early to climb 'Tafeltinden'. Here we climbed the long glacier which was still holding untracked powder from the previous day, allowing a great ski down to the bay below.

Despite John's protest at having to use crampons and axes again our next sortie took us to 'Sofiatinden' and the opportunity for some 'steep' skiing on spring snow. After a long ascent on foot, we dropped off the summit skiing some excellent slopes at around 40 degrees. This has to be one of my favourite mountains on Lyngen in some respects, the opportunities for finding your own line remain long after the last snow falls.

For our final day we decided to head to Kvaløya once more, this time to the complex peak of 'Storsteinnestinden'. This excellent summit sports some really varied terrain with the potential for great descents on many different aspects. For us the runs down the south west side were the obvious choice, and I dropped down one line, while James skied an attractive couloir we had spotted on the way up.

Thanks to Sue, Francois, Phillipe, Patricia and John for an excellent week.