Patrouille Des Glaciers... to be continued in 2014 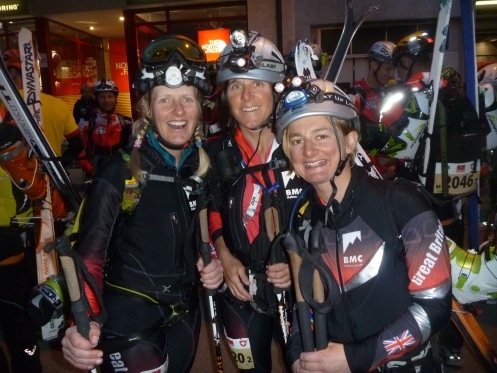 Throughout April we had very unsettled weather conditions across the Alps and I had anticipated that the Patrouille Des Glaciers might be cancelled.  I had feared that we might not be capable of meeting the cut off times.  But through all the training I had high hopes that we would be running down the streets of Verbier towards the finish sometime on Saturday afternoon.  I had not anticipated what was actually about to unfold...

The first PDG race on Wednesday was cancelled due to high winds but our race on Friday was still planned to go ahead.  It was tough to make the final preparations leading up to the event with some uncertainty as to whether it would happen.  With a whole season of training behind us I tried desperately to block out this possibility.

The pre race briefing (and blessing) took place as planned in the church in Zermatt.  The vicar likened the participants to Chamois, in the way that we need to look after each other to survive in the mountains.  We were given the forecast which told us that the wind was still 80kph at the top of Tête Blanche (you can see a video of the conditions on Tête Blanche here) but still no hint of cancellation, just “Bon Chance”.

So there we were on the start line at 9pm, psyched for the 4000m of ascent that lay ahead of us, aiming to be the first female team from Britain to complete the event.   I remember it being quite emotional watching the start of this event back in 2008, seeing hundreds of competitors racing down Zermatt high street anticipating the challenge that lay ahead of them.  It was also pretty moving to be one of them this time round.

The first section of the race is a walk (or run) for 500m of height gain until the snow line is reached.  Then it’s skis on and the long skin to the top of Tête Blanche begins.  The first cut off time was at Schönbiel and we needed to reach this within 3 hours.  We knew that we were going well when we passed this check point after 2 hours and 26 min.  From this point onwards we needed to be roped together.  We soon settled into a continuous rhythm that we maintained for 2 and a half hours.  The conditions became more and more challenging with the increase in altitude,  the wind becoming stronger and the wind chill factor.  The gusts were, at times, so strong we had to brace to stay upright causing us to break from the continuous rhythm.  But we also needed to keep moving to stay warm enough in our light weight race clothing.

5 hours into the race and we had reached the check point at Tête Blanche, again ahead of our schedule.  I would have thought being Scottish would have helped me deal with the bitterly cold conditions; but it didn’t.  The kind military personnel manning the check point helped me with everything I couldn’t do because of the cold; put my goggles on, changed my skins, did up my boots.  I was feeling pretty sick by this point.  Di asked me whether I thought it was the altitude, the cold, the wind or exhaustion that was making me feel like this.  I replied “all of the above”!

From here we started to descend, still roped together, into a head wind through the darkness in our finally tuned racing snow ploughs.   We were careful not to get the rope caught around the poles that marked the way.  Then another short skin to the Bertol Hut and it was rope off and downhill all the way to Arolla.  Thank goodness for the bananas and hot grapefruit juice at the Bertol hut to give us some extra strength for the descent.

On reaching Arolla we knew that our goal was achievable.  We arrived in Arolla at 3.37am, again much earlier than we had hoped for with the cut off time being 6.30am.  Leanne had kindly come to meet us at that unearthly hour to check we ate and drank properly, and covered us in sun cream ready for when daylight arrived.  We were psyched.  We believed we could do this.  We could do it.  We had done the hardest part over Tête Blanche and were over half way.  The dream of running down the main street in Verbier was in our sights.  All we had to do was keep going in the same continuous rhythm which we had become so well practiced at.  Off we went, up out of Arolla leaving the village behind.

As we left the pistes of Arolla with a good chunk of this climb behind us, I started to notice head torches coming down towards us.  Not unusual, as throughout the course there had been some spectators and officials coming in the opposite direction.  We maintained our rhythm and focus.  But there were lots of these spectators, and they were travelling faster than normal not taking much notice of us.  And they were in lightweight kit.  We kept going up. But they had numbers on.  Then the penny dropped; they were competitors.  Eventually one of them stopped and passed on the message.  The race had been stopped due to the avalanche conditions on the next part of the course.

At the moment our goal vanished.  A whole season of training and through no fault of our own our goal wasn’t going to be accomplished.  It was an emotional moment for the team; so proud of what we had done but devastated that for this year it wasn’t going to be.  We descended back down the piste to Arolla numbed by the feeling.

The excitement wasn’t over.  Arolla is a small village, and barely that.  It was certainly entertaining to watch the military deal with the unpredictable and cope with 2000 competitors in this small place at 5am at the morning.  Before too long buses arrived to shuttle us all to Verbier, dropping us just before the finish line so that we could still have the pleasure of crossing it.

Times and places were given for teams based on Zermatt to Arolla.  390 teams completed this section (of which only 24 were female) and we finished 328th.

When I started the preparation for this event I thought it would be a “one off” like doing the London Marathon.  Not only will we need to return in 2014 to complete the challenge but I think I might be hooked on Ski Mountaineering Racing and be entering a few more next year...