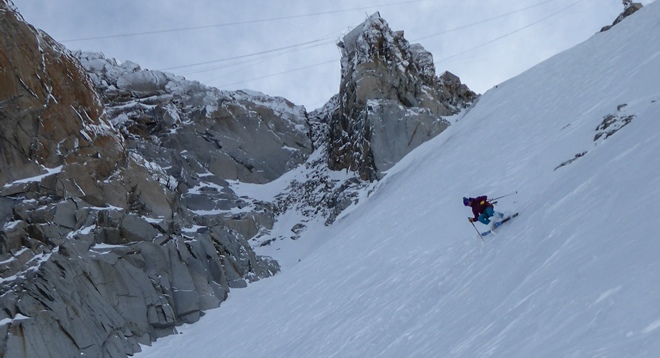 In February, James and Kenny Grant had a day off and snatched a descent of the much sought after line of the 'Glacier Rond'. It's fair to say that in Chamonix there are lots of skiers operating at a high level and dropping down all sorts of steep descents on a daily basis. For James and Kenny this was a nudge into the "steeper" terrain that makes Chamonix so famous.

The line of the Glacier Rond is visible on the North West side of the Aiguille du Midi, and for many will need little introduction. The upper slopes being accessed by an exposed traverse from near the Cosmiques Refuge. The entrance to the upper slopes was quite scraped and necessitated a short abseil, before coming off the ropes and started to put in the turns.

Kenny Grant is pictured above on the upper (allegedly 45 degree) section.