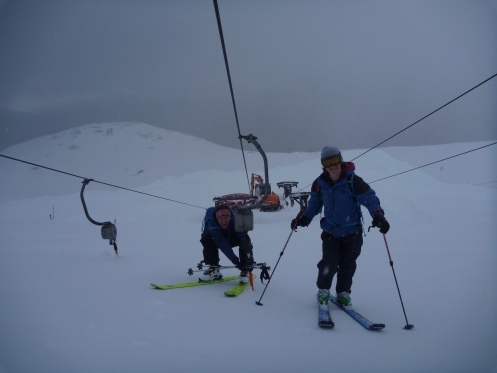 Despite having not skied in Scotland for 10 years, I still feel increbily passionate about it.  If it wasn't for skiing in Scotland, it is doubtful whether I would have the job that I do.  I have very fond memories of skiing there as a child.  So when the opportunity arose to return for a long weekend, I jumped at the chance.

The weekend I had free coincided with both the Skimo Scotland races and the Fort William Film Festival, which Jottnar were sponsoring.  One of the Skimo races was due to be held at Glencoe, which I was especially excited about as I had never skied there before.

Sadly both of the Skimo races had to be cancelled due to the wild weather.  Thanks to them for doing everything they could to make them run but this time the weather was just too fierce.  As we battled our way down Fort William High Street into the driving wind and rain there was no doubt that it would have been impossible to run a race!  The wind was truly feroious.

However we did manage to get out for a skin during a "calmer" spell and it was wonderful to see how much snow is on the hills.  There are a few photos to show the amount of snow here.  I think conditions there will be good well into the spring.  Someone asked me if the ski patrol hut was still visible.  My reply was "what hut"?