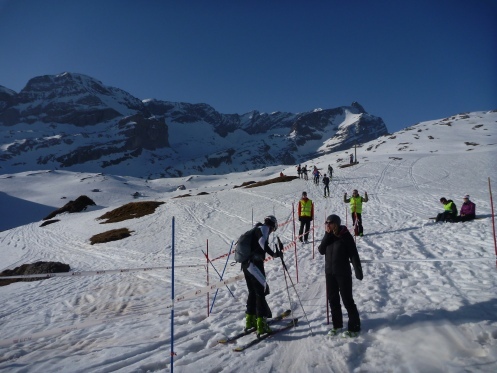 With a weekend off there seemed to be no better way to prepare for the Patrouille des Glaciers than to get some race practice.  The Trophées du Muveran is a race that has always appealed to me.  It was set up in 1945 to provide non-military participants to have the opportunity to race as teams just like in the PDG (which was restricted to the military in those days).

We decided to do the shorter course, Trophée de Plan-Nevé (1435m of ascent over 20km).  Anne Wilson very kindly stood in for Di who is still in the UK.  Her ability to chat and race at the same time was particularly impressive!

It was a fantastic event to be part of, with over 1300 participants taking part in the various different races.  The event caters for all levels of ability and it was great to see the elite and first timers all racing in the same area.

One of the highlights of the event was the carpets that had been put in place to link together the snow patches for the first ascent and final descent.  You'd think that you would rapidly come to a halt when you went on to them, but the opposite happened and they were faster than the snow. It certainly wasn't a place to fall over, or attempt to overtake, with the carpets being only 1m wide.  As Anne pointed out, for the ascent it would have been good if they had been moving carpets!

We were pleased to finish 26th out of 72 in our race and many of those ahead of us were male or mixed teams.  We know that Di was with us in spirit and look forward to her joining us later on in April.