Great skiing achievements from the young and older ... 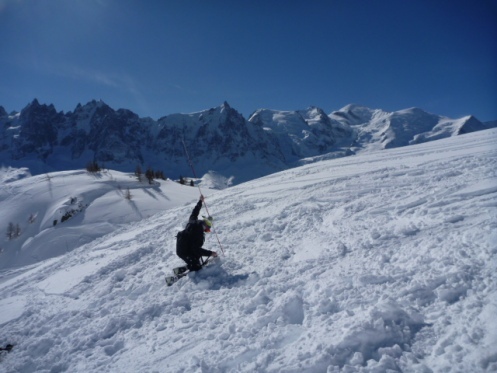 Last week I was delivering a BASI European Mountain Safety (EMS) Course.  This is a course that all instructors need to complete in order to gain the top level qualification needed for working in France (Level 4).  Monday was fantastic for practicing poor visibility navigation; just the sort of conditions you want on a training course but not on an assessment!  We also did tours up the Berard valley and over the Col de la Fenêtre at Les Contamines.

This weekend I was participating in the British Ski Mountaineering Championships down near Grenoble.  Jon Morgan and Gaby Lees have been crowned British Champions.  The organisers did well to get a race off the ground in such poor visibility.  The race course was changed, and then cancelled after around 1500m of ascent (we were meant to do 1900m). It’s all good training for the Mezzalama at the end of April.

On Tuesday night I headed round to support and resupply Ben Bardsley, Jon Morgan, Ben Tibbets and Misha Gopaul on their non-stop traditional Haute Route from Chamonix church to Zermatt Church.  It was fantastic to see their head torches descending from the Grande Lui – although I’m not sure they were enjoying the 2000m of breakable crust.  They completed the 8400m of ascent and 114.3km in 31 hours.  This is truly inspirational stuff.

It was a pleasure to work with Ben (aged 9) and Gemma (aged 7) yesterday.  They completed their first tour earlier in the week; the Col de la Fenêtre, the one we had done earlier in the week with the BASI students.   We had a look down the Poubelles Couloir and then spent some time practicing the sort of turns they might need if they are to ski that one day.  They are incredibly talented skiers for such a young age.

Meanwhile my parents have sent through some pictures of the great skiing they are having at The Lecht at the moment ...