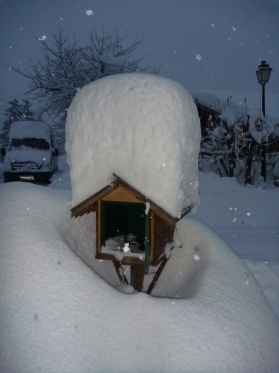 As this is being written there is plenty of snow falling outside, with the forecast saying there will be 30 - 50cm overnight.  I was skiing at Les Houches today and our tracks were getting filled in by the time we came round for another run.

With so much snow and gale force winds high up other places may take a while to open tomorrow so if you want to make the most of the powder first thing then Les Houches will be the best place to head.  The freezing level is due to rise up to 1500m so get there early before the snow turns heavy.  Once the temperature goes up you can check where else in the valley has opened if you want some more skiing.

The weather is due to be better through in Italy so if you'd prefer to be out of the wind and have better visibility then it would be best to go to Courmayeur (but as a result there will be less powder...).

The weather forecast for Sunday is slightly better so this would be the time to head to Les Grands Montets or Le Tour.

Remember to get up early as there will probably be some snow to clear of your driveway in the morning before heading to the slopes!